Last night saw the premieres of two shows I’ve been waiting for: Westworld on HBO and Ash vs Evil Dead’s second season on Starz. The results were a mixed bag, but hope springs eternal. 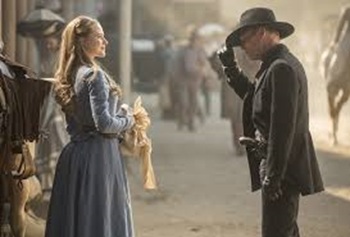 I have been looking forward to HBO’s take on Westworld for a long time. I have fond memories of being scared silly by Yul Brenner in the 1973 version of it. This Westworld was worth the wait. It unfolds in a sprawling, utterly realistic Wild West theme park where android ‘hosts’ provide a full immersion experience for their paying guests—‘newcomers’, as their programming dubs the human visitors. In the original film, the hosts were more traditionally robotic. The current approach gives us a truer AI, and with an ideological slant towards Battlestar Galactica rather than Ex Machina.

The new Westworld begins brilliantly, with the barest bones of the original film’s concept. The cast is top-notch, the writing superb, and the convolutions of the plot promise deep and strange directions to come. The pacing is precise, with loops and repetitions that become the story’s wheels within wheels.

There is much to think about, here, about the line between the real and the artificial. In what was possibly my favorite scene, a robot host visibly, visceraly adapts its programming to both follow its embedded script and incorporate discordant (and, what should have been unreadable) new information. And while Ed Harris is cold and creepy as the primary villain, he’s not nearly as terrifying as Yul Brenner was. But then again, I don’t think we’ve seen even a fraction of what his character is capable of. Next week can’t come soon enough.

Ash vs Evil Dead, back in action

On the other side of the spectrum, the return of Ash vs Evil Dead was disappointing. Season one successfully incorporated a semi-serious subplot. But as Ash vs Evil Dead starts season two, it seems to have given up too much of its crazy humor to retain its original charm. While the gore is still cheesy and exuberantly over the top, the show actually feels more like the original Evil Dead film, now—more threatening, less loopy fun. But there’s more missing than just silliness.

Part of the episode’s problem is that it felt very rushed, as if plot and character development had been purposefully sacrificed for incessant action. The end of last season saw Ash and company taking a truce and heading to Jacksonville, Florida. Season two starts with the immediate reversal of the road trip. By the first commercial they are back in Ash’s home town, where lots of random events happen—some campy, some supernatural, some just padding. But none of it is consistent. The episode is a mash up of too many ideas with not enough time allowed for them to gel into a reason to keep watching.

I’m hoping that episode two takes a deep breath and slows it down a little. There are more than enough plot elements to work with, and Ruby is still riding the line between nemesis and ally. The qualities that made the Evil Dead franchise so endearing are still there, if the show’s writers and producers are willing to pick out the strongest ones and run with them. Again.