It’s mid-way through the summer, and we need a refresher; a little light super hero entertainment. Nothing too massive and self-important—we had that already. Certainly nothing too serious. And now we have Ant Man! It’s hard to be epic when your hero is the size of an ant. But it’s easy to be pretty harmless fun.

A few minor spoilers lie ahead. 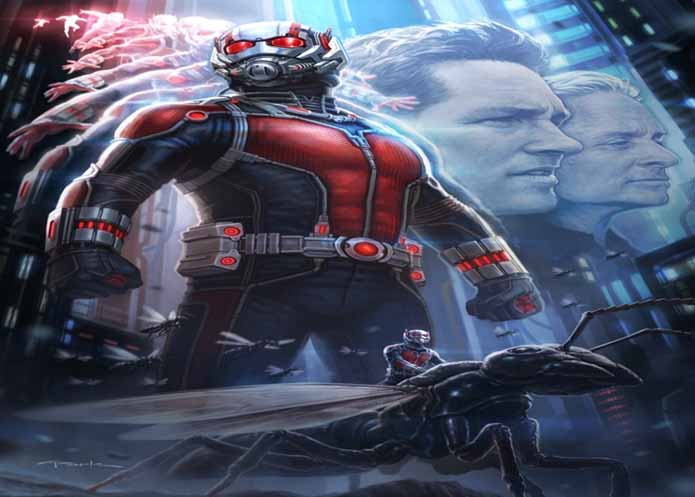 The frequent pingbacks to the Avengers and the larger Marvel Universe lend some substance to what is otherwise a very fluffy enterprise. While a few characters and critters meet their ends, Marvel doesn’t venture into Food of the Gods territory at any point. The peril to loved ones and faithful companions is moderate. The bad guys are, dare I say, cartoonish—almost more cranky than evil.

Our hero, Scott Lang, is supposed to be an electrical engineer ex-con trying to go straight for his daughter’s sake when he gets sucked into being a super hero. His prison stint taught him how to MacGyver pretty well, although it seems to have reduced his knowledge of electrical engineering to using a voltmeter correctly. No matter, though, because once he gets into his Ant Man suit it’s a whole new game.

While the backstory and set-up for all the comic book heroism drags on longer than it should in an action movie, the cast more than makes up for it until the action really kicks in.

The movie is peopled with familiar faces who all seem to be having a grand time with the material. Paul Rudd is his usual likeable self as our Ant Man. Rudd is a pleasant actor who lacks the commanding presence for a more substantial character, but he has plenty of charm to carry off this one.

Fortunately, Michael Douglas brings the gravitas, and also a snide crustiness that fits the reclusive genius Dr. Pym. Evangeline Lilly is intense and competent as Pym’s daughter, Hope, while Corey Stoll is intense and crazy as the primary villain, Darren Cross. Did anyone else notice that the bad guy’s initials are “DC”?

Rounding out the reluctant hero line-up, Ant Man’s literal partners in crime are played by Michael Peña, David Dastmalchian, and the surprisingly personable T.I. The trio are an excellent comic distraction when the story leans too far toward playing it straight. Peña especially provides some hysterical expository/connecting narration that both keeps things moving and drops a lot of hints about the sequels we all know are coming.

At various points, Ant Man seems to be channeling any number of other movies, not just foreshadowing Marvel films. There are some frenetic action sequences that are reminiscent of both Fantastic Voyage and Flushed Away, and one spectacular battle that fully embraces the silliness of an ant-sized superhero and his equally tiny nemesis that has overtones of Toy Story. The CGI of another pivotal scene seems to have been cribbed from Interstellar, and yet another brings to mind Indiana Jones and the Last Crusade. There are a lot of familiar bits referenced here, and I’m sure I’ve missed some. Fortunately, the familiar bits are better than simple pastiche. They are well executed, in-context, and create an immediate likeability because they are familiar. Not quite homage, but nicely played.

The bottom line, for me, anyway, is that Ant Man is a fine way to spend a hot summer evening. It’s good, not great. It’s fun, not epic. It exists primarily to get Marvel a little closer to Civil War. And it helps keep us entertained until we get there.