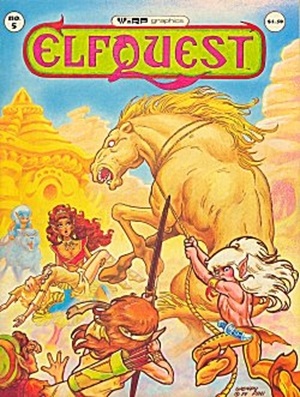 Elfquest is an epic comic book series created in 1978 by Wendy and Richard Pini which I am very much attached to—I still have the collected  editions from the eighties, when I first discovered them. The art is colourful and distinctive, the characters are sexy, smart, and interesting, and the story a classic hero’s journey. Beginning with the adventures of the Elf tribe the Wolfriders, over the years the world of Elfquest became a sprawling, centuries spanning universe that incorporated a little bit of everything into the story.

The elves of Elfquest are actually an alien race who came to the World of Two Moons (eventually known as Abode) to escape the end of their own planet. These extraterrestrial elves are essentially immortal and have a wide range of innate psychic abilities including telepathy, telekinesis, levitation, shape-shifting, and healing.

Their ship appears as a shining palace to the Neolithic humans of the new world, and the Elves as, well, elves. The first meeting does not go well. Despite this, the Firstcomers (whose immediate descendants are known as High Ones) are eventually revealed to have profoundly influenced human folklore and culture although they are not credited with it. Instead they are hated and hunted, a situation which sets the stage for the Pini’s long saga. 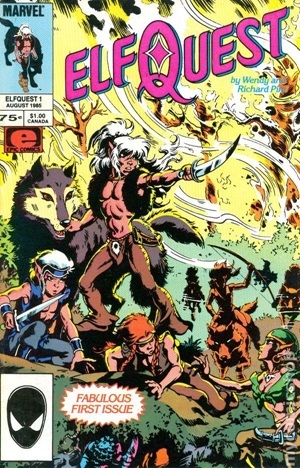 Cutter and his Wolfriders are at the heart of Elfquest. Like all elves, Wolfriders are descended from the otherworldly, undying High Ones. But to survive on the alien World of Two Moons, their tribe’s foremother transformed herself into, lived as, and bred as a wolf. As a consequence the Wolfriders now have wolf-blood in their veins and a very long but still mortal lifespan.

The narrative of Elfquest begins when the Wolfriders’ forest home is destroyed and they must set out to find a new place to settle. Along the way they discover and intermarry with other elf tribes they never knew existed—the desert-dwelling Sun-folk, the sorcerous Gliders, the warlike Go-backs, and the aquatic WaveDancers. They encounter Trolls and Preservers, other species that came to Abode with the High Ones, and the humans who are native to the world. And they find the lost Palace of their ancestors with all its history intact.

The Pinis initially published Elfquest themselves through their company, Warp Graphics. The title was next put out by Marvel, then DC, and it is now published by Dark Horse Comics. The original series ran for twenty issues and was followed by two shorter series—the eight issue Siege at Blue Mountain and the nine issue Kings of the Broken Wheel.

Although the original quest officially concluded after these, during the 1990s the Pinis filled in many of the historical details, side adventures, and far-future events on Abode in a number of additional titles including Hidden Years, Blood of Ten Chiefs, Kahvi, and Jink. Dark Hose Comics is currently publishing Elfquest: The Final Quest series, begun in January 2014 and slated to run for 24 issues, that picks up the story of the Wolfriders shortly after the end of the original quest.

Elfquest 19, and some elf magic

Like many cult favorites, Elfquest inspired a decent amount of spin-off merchandise with varying degrees of success. There were three novels (Journey To Sorrow’s End, The Quest Begins, and Captives of Blue Mountain) and five Blood of Ten Chiefs anthologies. An album of folk songs called A Wolfrider’s Reflections happened, although I won’t vouch for it.  Of course there was an RPG produced by Chaosium between 1984 and 1987. Board games were released in 1986 and again in 2015. A handful of action figures were produced. In the 1990s a failed attempt was made at an animated series, and a possible 2008 film announced by Warner Brothers never got off the ground.

But no matter about the misses. Elfquest is a well-loved property. Even before the relationship with Marvel, Kitty Pride wore an Elfquest tee-shirt and a sprite named “Pini” appeared in X-Men #153, and a scene from Elfquest showed up in the background of Fantastic Four # 242. Its strength has always been on the page, and the fact that it’s still going strong at Dark Horse speaks volumes.

If you’re not already familiar with Elfquest and the Pinis’ other work—and especially if you are– all issues published before 2014 are available for free online. Let the journey begin, again.