Preacher, the comic book-inspired series that debuted on May 22 on AMC, is so far a cautiously-paced, blackly funny critical darling of a show. I am not familiar with the original Vertigo comic book, so I can’t compare the adaptation to its source material. But three episodes in to a ten episode run I am enjoying Preacher immensely. There is a catchy if still-murky premise, a sly wink to its unavoidable irreverence, and a great attention to character details that I hope the show will sustain. 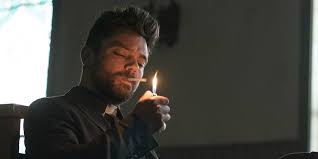 Preacher takes place in the dusty Texas town of Annville, where Jesse Custer has returned from a life roughly lived to serve (unsuccessfully) a shrinking flock at the failing All Saints Congregational Church. He still drinks heavily, still smokes like a chimney, and cannot quite abandon his ability (and willingness) to beat the crap out of deserving people. He refuses the bait when his ex, Tulip, shows up to try to persuade him to take on another “job”. She won’t take his no as a final answer. The vampire Cassidy literally falls from the sky into the middle of Jesse’s fight with his past. Then the mysterious alien force comes knocking and finds a home in Jesse, and the series can rightly begin.

That summary brings us to the end of the pilot. It isn’t until halfway through episode 3 that Jesse begins to explore the power he only discovered at the end of episode 2. Cautiously paced, indeed. 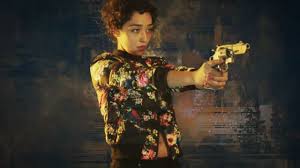 The main characters are likeable in a really bad decision kind of way. Dominic Cooper broods with charm as the rumpled, doubting Jesse Custer, Ruth Negga is sweet, wickedly sarcastic, and dangerous as Tulip O’Hare, and Joseph Gilgun is cheerfully deranged as Cassidy (So far, the dissolute, 119 year old vampire Cassidy is my favorite character. His accent is almost impenetrable and his habits are disgusting. Blood may be the life but booze is more fun, and boredom appears to be his primary enemy. And somehow, improbably, he is Jesse’s best friend).

Because of the strength of the casting the characters all have surprising depth to them, considering how little information we actually have about them and what drives them. Even the secondary and supporting players are rounded out, written with a great deal of intelligence, sympathy, and cutting wit. 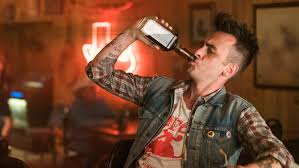 And Cassidy, the resident vampire

But then, Preacher’s dominant trait seems to be its dark, sharp humor—which ranges from panicky Russian Satanists to news reports of Tom Cruise exploding, and from a frequently referenced “bunny sound” to a cocktail of “rubbing alcohol, coffee machine descaler, and a bit of the stuff dripping off the back of the air conditioning unit”. There are several…invigorating…fight scenes, perversions, fetishes, and debauchery, struggles with faith, and a strong moral center who is not actually our hero. Sunglasses are used to great effect. And there is an exceptional soundtrack, with Willie Nelson and Johnny Cash leading the way.

Since the tangled past is already well known to the characters, they don’t spend any time rehashing it for the audience’s benefit. What is referenced is not well-explained, but there is a distinct air of Big Mysteries to be revealed somewhere down the line. It takes a little work to keep up, but the show is interesting, and not knowing the context is not such a big deal. Yet. But it will be.

It’s that cautious pacing. At this point, it’s beginning to feel nearly soap-opera slow—like the first season of True Detective, but funny. We are still finishing the set-up. Many things are beginning, but the threads are not connected, yet, and the writers aren’t tipping their hand. Right now there are many questions and many hints as to what may be coming, but the story arc hasn’t truly begun to bend. The first three episodes have been laying a lot of groundwork without filling in too many details. They have given us a fascinating peepshow of abilities, potentials, and motivations, with enough quirks and jokes to make us care.

But now I think Preacher’s plot needs to speed up and dabble a little more deeply in exposition to keep the audience fully involved. Going into episode 4, I am hoping for some serious, plot-making action. Three weeks is a long time to go without it.