Strange Days is an often-overlooked bit of 1995 cyberpunk written and produced by James Cameron (of Terminator, Aliens, and Avatar fame) and directed by Kathryn Bigelow (of Point Break and Zero Dark Thirty). As with many things Cameron it is overlong and somewhat bloated, but there is still a beautifully filmed, compelling story beneath the weight.

Strange Days was nominated for five Saturn Awards, winning two—Angela Bassett’s as Best Actress and Kathryn Bigelow’s as Best Director. Because of this film, Bigelow was the first woman to win the Saturn’s directing award. But no one wanted to see this movie when it was released—it made only $8 million, at a cost of $42 million. However, it’s the kind of film that is hard to shake off once you’ve seen it, which is why I’m here to tell you about it now.

Cyber and noir inhabit the same, discarded spaces, but with different technology, and Strange Days has a classic set-up. There are crooked cops and decent criminals, hookers with hearts of gold and fine, upstanding two-timers, corruption, double and triple crosses, and a hard-boiled love story all wrapped up in millennial paranoia. The scenes are dark and artfully grim, full of steam and neon and rain and a population that keeps to the edges of society. 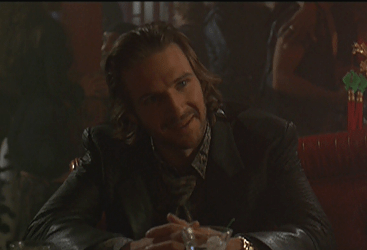 The coming Millennium looms over the action, all of which happens on New Year’s Eve, 1999. But this isn’t about the shadow of technological collapse—this is driven by the specter of racial tensions stretched from the flash point to the breaking point.

The main characters are a tightly connected group. Our antihero, Lenny Nero (Ralph Fiennes), is a former cop who has fallen into the world of squids—illegal electronic neural nets that can record experiences straight from the wearer’s brain. (Oddly enough, they look like facehuggers.) Squids are the ultimate virtual reality because they can give the user “a piece of somebody’s life…you’re doing it, you’re feeling it,” and because of that power they have created a different kind of junkie. Lenny is both a dealer and a user, endlessly replaying self-made clips of his ex-girlfriend, Faith. 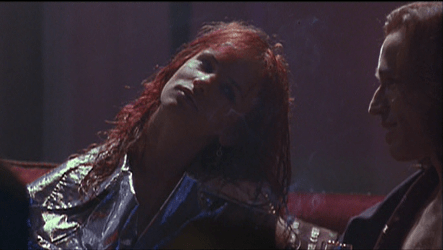 Faith (Juliette Lewis) is an ex-prostitute trying to become a star, who has moved on to someone who can further her ambitions. Philo Gant (Michael Wincott) is that someone–Faith’s current lover, powerful musical manager/promoter, squid-head, and generally nasty person with a particular problem with Lenny. Philo has all his artists followed, watched, and recorded to satisfy his increasing paranoia. Max (Tom Sizemore) is Lenny’s ex-cop buddy who Gant hires to watch Faith, and Iris (Brigitte Bako) is a hooker—an old friend of Faith, Max, and Lenny–who Gant hires to record a highly political rapper he represents.

And trying to remain clean in this tangled mess is Lornette “Mace” Mason (Angela Bassett), a chauffer/bodyguard with a deep history as Lenny’s friend and protector. She is Lenny’s moral anchor in a very slippery world.

The story is as twisted as any forties’ crime drama. It starts in earnest with the execution-style murder of a prominent rapper and activist, and the threat of retaliation and race riots to usher in the year 2000. Then Iris is killed, but not before she comes to Lenny for help and to warn Faith of a shared danger. The murderer uses Lenny’s squid addiction like a scalpel, hurting Lenny with a trail of minidisc recordings of worse and worse crimes, all of it designed to set Lenny up as the fall guy and quite literally stab him in the back. 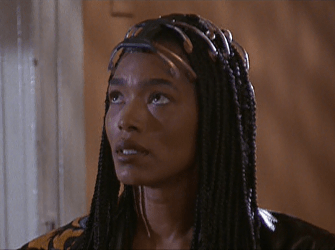 Mace with a squid

The virtual reality voyeurism in Strange Days comes from a technology “developed for the feds, now it’s gone black market”. The slang it inspires is vivid and believable: jack-in, wire-trip, wire-heads, squid-heads, ‘trodes and decks and clips. And blackjacks—snuff clips, where a truly sick wire-head can experience the actual death of the person making the recording through the victim’s eyes. Blackjacks are a special kind of hell, and they are used liberally to provoke the essentially-decent Lenny into headlong action.

The symbolism and iconography of watching is often obvious and in-your-face, with multiple instances of mirrors and mirrored surfaces used to reinforce the idea. Faith dresses all in reflective silver. Mylar balloons are abundant. Even the character’s name, Iris, reflects the theme—especially since what Iris witnesses and records is critical to the plot.

That bluntness is one of Strange Days’s primary shortcomings. While the characters are mainly well-drawn, the traits of the good guys and bad guys are often…typical. The dialogue leans toward stilted, becoming preachy at points with Dramatic and Important Declarations. At nearly two and a half hours the film goes on a little too long, with too much running back and forth and repetition of interactions. And, surprisingly, the ending is happier than anyone has any reason to expect.

Which leads us to the other issue. Both Cameron and Bigelow are known for flashier films than Strange Days, and they frequently fail to capture the necessary grittiness of cyberpunk. The overall mood and ambience is one of an idealized criminal underside. There are docks and alleys and crummy apartments. But there is also an industrial/techno club background of raves, stage-diving and Mohawks that visually references past, present, and future styles of rebellion. Outside the clubs and parties there is fire wherever the camera turns—cars, garbage cans, Molotov cocktails thrown in the streets. It evokes a studied end of times chaos that blends smoothly into the New Year celebrations going on around the main storyline. Everyone is clean.

But even with too much polish, Strange Days gets into your head. The visuals are hypnotic, the actors glossy and beautiful. The story touches on all the major tropes of noir in comfortable and satisfying ways. And the feeling of longing and loss and recaptured happiness that the squid technology can produce is compelling, to say the least. Maybe the happy ending is warranted, after all.