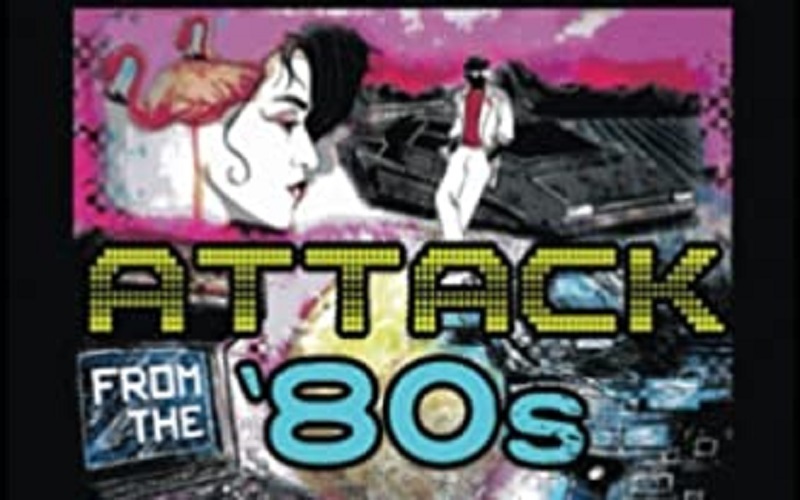 Attack From the ‘80s is a gloriously retro anthology edited by Eugene Johnson. In theme, in mood, in wild abandon, the stories and poems gathered here are a celebration of all things ‘80s. We have the fashion, the music, the movies, the politics, the economy, the trends, and the rumors that scared the parents. Gen X will feel right at home.

The nineteen tales and three poems in Attack from the ‘80s cover a lot of ground. Some name-check classic films of the decade. Others read like they are those films. Some are serious. Others fully embrace the gleeful day-glo aesthetic of low-budget mid-eighties horror. Some give us heroes. Others cheer on the monsters.

It never gets old, even if we did.

“Top Guns of the Frontier” by Weston Ochse blends the iconic movie with some old-school occult hillbilly horror.

“The Devil in the Details” by Ben Monroe lives up to its title, with just a dash of Lost Boys in its setting and mood.

“Return of the Reanimated Nightmare” by Linda A. Addison weaves together threads from some of the best ‘80s horror into something entirely new.

“Taking the Night Train” by Thomas F. Monteleone was first published in 1981 and captures the gritty reality–and unreality– of that era’s New York City.

“Catastrophe Queens” by Jess Landry is wonderfully over-the-top mash up of zombies, mutants, and girl power, with a Night of the Comet vibe. One of my favorites.

“Your Picture Here” by John Skipp is another look at NYC and the decadence of Times Square, with a sly wink to its denizens and its creepy delights. Another favorite.

“Slashbacks” by Tim Waggoner takes us to a specialty video store and shows us just how cathartic those movies could be.

“Munchies” by Lucy A Snyder does some very satisfying things with Regan-era boogeymen and platitudes. Another favorite.

“Ten Miles of Bad Road” by Stephen Graham Jones takes on heavy metal poseurs in a disturbing tale of revenge.

“Epoch, Rewound” by Vince A. Liaguno goes deeper in its pop-culture references than any other piece in the anthology.

“Demonic Denizens” by Cullen Bunn taps into the satanic panic over D&D, and makes it even worse.

“The White Room” by Rena Mason takes on the coping mechanisms for the rage and anxieties of wealthy Yuppies.

“Ghetto Blaster” by Jeff Strand is an oddly affectionate if bloody take on what was once the height of audio technology.

“Haddonfield, New Jersey 1980” by Cindy O’Quinn uses the myth of Michael Myers to frame the story of a man falling apart.

“When He was Fab” by F. Paul Wilson was first published in 1992, and explores the lengths one man goes to to be one of the cool kids at the club.

“Perspective: Journal of a 1980s Madman” by Mort Castle contrasts the cultural milestones in each year of the decade with the progressively darker crimes of the narrator.

“Mother Knows Best” by Stephanie M. Wytovich is a tale of teen madness and vengeance with hints of Carrie and Deadly Friend.

“Stranger Danger” by Grady Hendrix reworks the old threats of dangerous Halloween treats into a means of liberation. Yet another favorite.

“The Garden of Dr. Moreau” by Lisa Morton gives us breakthroughs in gene-splicing, a burgeoning vegetarian movement, and overtones of Day of the Triffids.

Attack From the ‘80s proves to be a thorough and nostalgic tribute to a decade that was a lot more complicated than some of us want to remember. If you lived through it, you’ll recognize the monsters and the people that shaped them. If you’re coming to it from a different generation–welcome to the jungle.