In the Devil’s Cradle, S.L. Edwards’ debut novel, is an intense account of a family caught up in the founding myth of their nation. The narrative takes place over a few frantic days as the fictional country of Antioch reaches a tipping point that will redefine it. It will also redefine the Esquivel family in ways they never wished to imagine. 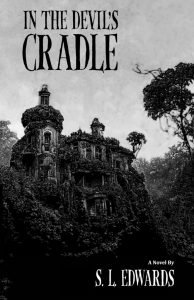 As increasingly violent unrest roils Antioch’s capital, Senator William Esquivel is able to get himself and his family out of the city and to Casa Verde, his ancestral home in the isolated, insulated town of Rio Rojo. But Casa Verde is not the sanctuary he had hoped it would be. The mansion is surrounded by deep, haunted woods, and by the land’s long memory of what it was promised by William’s ancestor–the legendary Thomas Holcombe, the man who made Antioch a nation.

As in some of Edwards’ best short stories, the heart of In the Devil’s Cradle springs from the intersection of the familial and the political. The family dynamics in the novel feel true to life, and are inescapably affected by the politics seething in the background.

Senator Esquivel and his wife are part of those politics, and attempt to navigate the convoluted factions and shifting, unstable alliances. They count on old connections and loyalties, but nothing quite lines up. Their own understanding of the balance of power is impeded and undermined by the very place where they sought refuge. And as they struggle to stay ahead of the situation, their ability to keep their children safe becomes more and more compromised.

As a grim slice of life, the novel is deeply effective. Edwards’ characters are fully fleshed out, and I easily became invested in their fates. But while I believed all the details of the Esquivels’ lives and innermost thoughts, I found myself wanting more of the history of the supernatural shadow hanging over them. The different ghosts and how they possess or influence the living remain unexplored. I know who they were, once, but their motives and capabilities are left largely opaque. I want to know more about those ghosts. I want to know why they do what they do. I want to know the tangled politics behind the haunting.

In the end, In the Devil’s Cradle left me both satisfied with the outcome and wishing for more of Antioch’s supernatural history. But the emotional core of the story is tense and beautifully drawn, the ghosts are disturbing, and the novel holds its own even without the additional context.