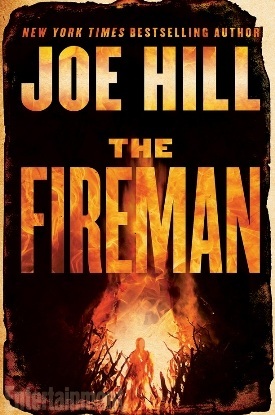 The Fireman, Joe Hill’s latest opus, is a big, rambling, post-apocalyptic horror novel that is fast-moving and entertaining but, for me, ultimately unsatisfying. I was never engaged enough to suspend my disbelief or to be even remotely scared by the goings-on. This was a distinct impediment to my full enjoyment of a promising feast. So while I found the novel action-packed, reasonably fun to plow through, and a good enough way to spend a couple of days, I could not in the end take it seriously.

The Fireman begins with the world in the throes of a new plague known as Dragonscale—a highly contagious fungus that causes most infected people to burn alive, and to burn the world down with them as they go. A lucky few, however, have learned to make a chemical peace with the infection. Some can even use their fire as a tool, or a weapon. These fire-users become the novel’s main characters, fighting to get to a safe place rumored to be off the Maine coast.

This, for me, is where The Fireman’s problems start. I didn’t find these characters believable as real people, and so it didn’t matter to me if they succeeded.

Hill’s POV character is Harper Willowes, a twenty-six year old nurse infected with Dragonscale, pregnant, and fleeing what she has just now discovered is an abusive marriage. To me, she comes across as both trite and cutesy. Her main character traits seem to be her weirdly optimistic affect, unlikely medical knowledge, and obsession with Mary Poppins. The last highlights the inconsistencies in her personal frame of reference. Harper is supposed to be in her twenties, but Hill’s timeline of her experiences and life events (as well as her taste in music and children’s films) all skew at least a decade older. She is a collection of quirks that never quite gel into a convincing person.

The main male character is John Rockwood—exhibitionist British mycologist, romantic lead, Dragonscale master, possessor of a 1935 hook and ladder rig, and so the Fireman of the title. He also suffers from an abundance of odd traits. He is somewhat more realistic than Harper, but he still ends up being presented as an assemblage of eccentric details rather than a fully-developed character.

I also found the secondary characters weak in The Fireman. Hill uses a lot of stereotypes in the peopling of his novel, from the calm, wise black woman to the grandfatherly old man and from the evil conspiracy theorists to the pseudo-religious cultists gone bad. Profanity and lascivious chatter are thrown in at random and attributed to various characters without regard for who they are supposed to be, giving the racy dialogue a toneless quality and a distinct lack of impact. Teens are largely portrayed as Lord of the Flies-style savages. The bad guys are single-dimensional at best, cartoonish at worst, and consequently not particularly frightening. None are truly individuals—they are tropes and plot devices which act without personality. I couldn’t find anything about them to genuinely care about. 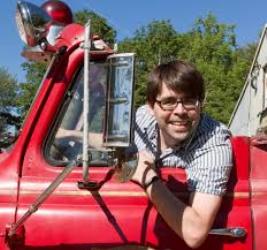 Joe Hill as a fireman

The Fireman may be intended as homage or at least a pastiche, but the literary and cultural references are so in-your-face it is hard to take them as other than too-clever name-dropping. We get the direct naming of Margaret Atwood, Cormac McCarthy, and Harper Lee. We get obvious allusions to Rowling’s Harry Potter series, Bradbury’s Farenheit 451, King’s The Stand, Pet Semetary, Firestarter, and more.  At one point Hill uses his father’s technique of detailing a sudden disaster’s effects on minor characters. But the trick falls flat when there is no relationship with or between the people he suddenly throws into the story.

As with the references, so many of the details feel disconnected, as if Hill were focused more on moving the plot along (which he does, extremely effectively) than building a convincing end-of-the-world scenario. I was distracted by too many technical questions that stood out more clearly than the characters themselves. For example: Where do all the big trucks and construction vehicles gas up when they are driven for hundreds of miles? How do the overweight characters stay that way for months on end if the survivors are on short rations and skipping meals? And why are there always canned peaches?

So, to sum it up: despite the undeniably compelling pacing I found the characters poorly drawn, the cultural and literary references overdone, and the post-apocalypse details unconvincing. I can’t recommend The Fireman as more than a lightweight beach book. It is a glossy, compelling, in-joke of a novel with unlikely nonstop action, deus ex machina plotting at every turn, and an additional scene dropped off after the credits that teases a sequel. It will fall apart if you look too deeply. But if you don’t look, and don’t really expect too much, The Fireman can still be fun.