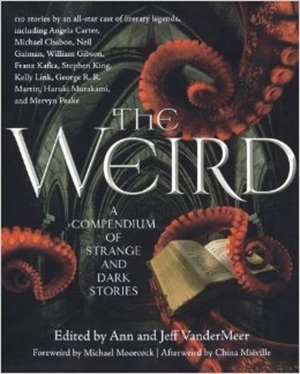 The Weird is a far-ranging 2012 anthology compiled by Ann and Jeff VanderMeer, both of whom have stellar weird credentials—Ann was an editor at the legendary Weird Tales magazine before it fell into limbo, and Jeff is an established novelist of the New Weird known for his Southern Reach trilogy. Together, they have identified many stellar, foundational, and surprising examples of the genre. For this volume, the VanderMeers assembled one hundred and ten stories that fill more than a thousand pages and that demonstrate a spectrum from the most traditional of weird tales to the post-modern new weird.

As Michael Moorcock observes in his “forweird”, “There are no rules for the weird tale, which is at least part of the attraction if the story an author wants to tell can’t readily be told in an established form,” at a stroke releasing the idea of weird fiction from the usual genre constraints. And, he adds, “the best writers write the best weird stories”.

In this ambitious a collection, with stories ranging in time from the early years of the twentieth century to present day, there are of course many familiar authors we are used to considering ‘the best’. The VanderMeers do give us Lovecraft, Ligotti, and Clark Ashton Smith. But there are even more unexpected additions to the ever-widening gyre of weird lit such as Kafka, King, and William Gibson—all of whom are also in here. Ryūnosuke Akutagawa, the author of Rashōmon, appears with the inflected and disturbing “The Hell Screen”, and the remarkable but often overlooked Daphne du Maurier is well represented by the grotesque “Don’t Look Now”. And there are so many more surprises. Among my favorites are:

“The Willows” (1907) by Algernon Blackwood, which is what I would describe as classically weird. It is a slow, repetitious, corrosively told tale that keeps its true horrors almost entirely hidden. Its length seems at first excessive, but the undefined dread feeds off it.

“The Man Who Sold Rope to the Gnoles” (1951) by Margaret St. Clair is a story I first encountered as a child in an old Alfred Hitchcock Presents anthology. It is a short example of capitalism and avarice gone horribly wrong, as inspired by Dunsany.

“It Only Comes Out at Night” (1976) by Dennis Etchison, a story I first encountered in The Year’s Best Horror Stories series, is bleak and creepy and inexplicable as the best of the weird always is. This one always comes to mind on long car trips, and makes it clear why Etchison is a legend in the horror community.

“Angels In Love” (1991) by Kathe Koja is almost poetic in its descent, tracing the last days of an unimaginative party girl who wants something she can’t even conceive of. There is an odd, punky, Southern Gothic quality to the story that makes the sudden brief weirdness of the conclusion its only natural outgrowth.

“The People on the Island” (2005) by T.M. Wright is an unsettling surrealist vignette in which none of the characters understands why their world is changing or how to deal with it. Wright’s familiar themes of loss, loneliness, and alienation are all here in one mournful package. 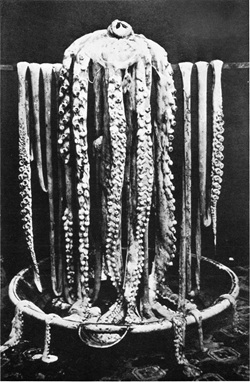 Since The Weird is arranged chronologically, it is easy to see the progressive development of the weird tale. I found in many of the earlier stories the weird quality is not fully realized, existing as a blurry suggestion rather than a fully integral component. Some of the stories included do not have the sense of cosmic nihilism I usually associate with weird fiction, falling more into the purely horror or surreal category for me. A few are trapped by their author’s prejudices, such as the remarkably dated “Unseen-Unfeared” by Francis Stevens, which I think perhaps the weakest addition to the collection.

However, the sheer number and international scope of the selections forces one to reconsider dismissing any of these strories or putting them into an easier category.  Taken as a whole, the stories make a reader look at what qualities would bring them into the weird fiction fold. They force the question, ‘What is Weird?’ —a question that is re-examined in China Mieville’s artful “afterweird”. In it he demonstrates his expression of the weird as well as summarizes the subject both richly and well: “This collection is not (just) an act of cannon. It does not, nor could it, enshrine one set of texts. Without motion—of the crawling and wriggling kind—there is no Weird”.

And it is hard to argue with that.