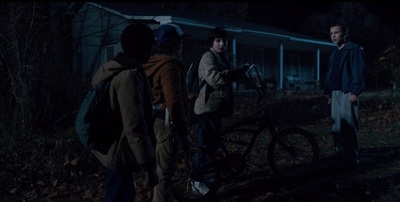 The middle-school heroes of Stranger Things

Stranger Things, Netflix’s latest series, launched its first eight episode season on July 15. I had to drag myself away after the first three episodes to write this review, because it is simply that good. Created by Ross and Matt Duffer, Stranger Things uses pop culture familiarity as its hook, and then moves the story along rapidly while still paying a huge amount of attention to detail and character development. I’ll be watching the rest in one long gulp very soon.

Set in the small rural town of Hawkins, Indiana, Stranger Things begins its tale on November 6, 1983 with the mysterious disappearance of a young boy. From there things really do only get stranger.

Titled “Chapter One: The Vanishing of Will Byers”, the first episode plays like a mash-up of all the classic horror and fantasy films of the 1980s—there are elements that remind me of Aliens, The Shining, Silver Bullet, E.T., Firestarter, Halloween, Poltergeist, The Goonies…even the town center is reminiscent of Back to the Future, and the missing boy’s house looks an awful lot like the cabin from Evil Dead. In addition to tidy downtown Hawkins, the action ranges through woods, fields, a deep quarry, and a convenient government-run laboratory. It all looks familiar. We’ve been scared here before. But Stranger Things is not just a derivative of all these touchstones and references. It manages to be something original and disturbing in its own right. 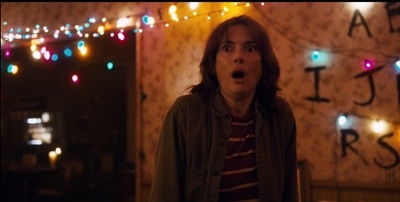 Things are getting strange

Winona Ryder is back as Joyce Byers, the missing boy’s mother. She plays the character as worn thin and harried and histrionic, and she smokes with the same intensity she did in Heathers. Her attempts to find her son look a great deal like a descent into insanity.

Matthew Modine is cool and slick as the primary bad guy, Dr. Brenner. He works at Hawkins National Laboratory for the Department of Energy and is aligned with government agents and the CIA, among darker things.

David Harbour is the hard drinking local police chief, Hopper. In only three episodes he has already been given a colorful backstory and fascinating growth, and a deep well of personal tragedy to draw from.

Even with the adult star power, the juvenile characters are the main focus—especially since the missing boy was part of their group. With the exception of a couple of older siblings, the kids are in the 11 and 12 year old age range that Stephen King is so fond of. It ties neatly to the many King-like plot details.

The group of boys are introduced as Dungeons and Dragons players, then as now shorthand for a certain kind of nerd.  Finn Wolfhard is Mike, the leader of the gang and someone who looks quite a bit like the brother in Poltergeist. Gaten Matarazzo is Dustin, very much playing him as Chunk from The Goonies. Caleb McLaughlin rounds out the group as smart-mouthed, skeptical, and practical Lucas. To add to the mix there is the high school crowd, with Charlie Heaton as the missing boy’s older brother, Johnathan, and Natalia Dyer as Mike’s older sister Nancy. And there is also a mysterious, semi-verbal little girl named Eleven (played by Millie Brown), who is connected to both Brenner and the missing boy. 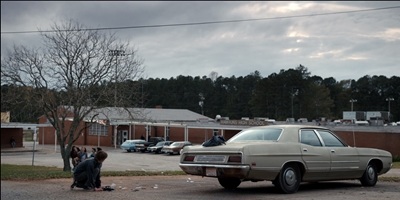 A theme of communication is dominant, so far. The initial episodes are heavy with ham radio, walkie talkies, wiretapping, ghostly phone calls, psychic powers, and weird electrical disturbances harnessed as a rough Ouija board. There is a lot going on, much of it messy, but it is just controlled enough to be engrossing. The only complaint I can make is that the periodic flashbacks are too blunt, and move things along with backstory info dumps.

Stranger Things is at once creepy, sentimental, realistic and action-driven. The Duffer brothers have a great eye for family dynamics and a clear affection for the cinematic 1980s. The combination of powerful storytelling, exceptional acting, and well-done nostalgia is totally worth the look back.