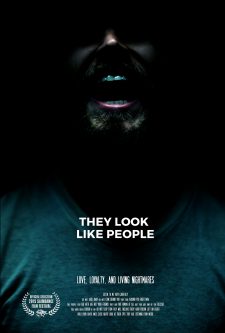 They Look Like People, a dark little film, was introduced at the Slamdance film festival way back in January 2015 and picked up by streaming services earlier this year. It’s been billed as low-key psychological suspense, and it can be. It is just as much a slow moving relationship study that could have been more thoroughly fleshed out in its 80 minute running time. Still, the story is complete, the characters interesting, and the film itself quite beautiful.

They Look Like People is director Perry Blackshear’s labor of love—he wrote, produced, directed, shot, and edited it, all with good results. The only thing Blackshear didn’t do was act in it. But he picked a very involved small cast for his essentially three-character screenplay. The possibly schizophrenic Wyatt is played by Mac Leod Andrews (who also produced the film), his damaged friend Christian is played by Evan Dumouchel (another producer), and Christian’s competent, silly love interest, Mara, is played by Margaret Ying Drake. All three are intense and believable.

They Look Like People begins charmingly enough with childhood best friends Wyatt and Christian suddenly reconnecting after an untold number of years apart. In addition to many other alluded-to life changes, both are reeling from failed relationships. Christian is trying to take control of his life again. Wyatt is losing his already tenuous grip on reality.

There are many well-done small touches. Blackshear makes excellent use of sound— the film is filled with the background patter of clocks ticking, insects buzzing, phones clicking, rail cars chattering. Coupled with the mechanical noises, the ambient sounds of human movement and activity give They Look Like People a surprisingly distant feel.

The use of light and color is also effective in creating a sense of distance. Greys and blues are the dominant palette. Blackshear creates a washed out look using rainy daylight, early morning winter sun, and bare basement fluorescents that evokes a feeling of alienation. Developing from that, the special effects are minimalist and hallucinatory, sliding in rather than jumping out. They build an atmosphere that is creepy instead of truly scary. 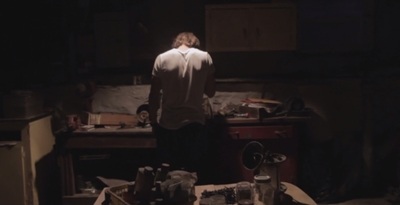 The basement, where things get worse

Other effects and techniques are less restrained. There are some distorted voice-over phone calls warning Wyatt of dire things like, “If you ever hear three claps of thunder in a clear sky, the war has begun.” There are other voice-overs intoning pseudo-profound affirmations for Christian. A significant amount of the movie takes place in a cluttered, cave-like basement, which generates its own sense of foreboding. Unfortunately, when rising action finally happens down there it recalls every shoestring horror movie since The Blair Witch Project.

But this is Blackshear’s directorial debut, and the weaknesses in They Look Like People reflect only inexperience.

For example, it needed a stronger editing hand. Too much of They Look Like People’s limited running time is spent on indulgent extended scenes that don’t add any depth to the story. And there is a lot of blank space—the screen goes black for long seconds between scenes like a curtain coming down. The episodic presentation feels unnecessary, given how short the film is.

What this slow pacing does is thin out an otherwise well-constructed story. There are deeper issues raised and then ignored, and hints of tragedy dropped in and then abandoned—all clues to how Christian and Wyatt got to this place. There was room to give them real context. The unexplored parts are more intensely missed for it.

The bottom line is that They Look Like People works. The wounded characters and the sensory details pulled me in despite the glacial pacing.

They Look Like People isn’t a horror movie, not even a psychological one. It is unsettling, ambiguous, and sad, a disturbing and at times uncomfortable dip into an altered reality. But I did not find it frightening. I found it fascinating in a raw-edged kind of way. Small, slow, and subdued, it has the ability to make me want more.