The Dragon Prince is quite simply wonderful. Netflix’s new epic fantasy is intended for kids, but like all great literature it is able to speak to everyone.

There are often facile lessons, or missing nuances, in young adult fantasy (okay, in adult fantasy, too). But not so The Dragon Prince. The balance of light and dark rings true. There are unlikely alliances, unbreakable oaths, and awakening magic. The action is exciting and the world-building immersive.

And while The Dragon Prince is an unabashed, sweeping saga, it is also warm and funny. There are elements of Heavy Metal, hints of ElfQuest, a healthy dose of Lord of the Rings, and even a bit of Archer in the character renderings. Snarky and self-aware, the dialogue slips in plenty of pop-culture: “I was trying to sweep the leg”, “Winter is coming…eventually”, and “Say ‘hello’ to my little friend” are all uttered at various points.

It’s been a long time since I so thoroughly enjoyed an animated series the way I enjoy this one. 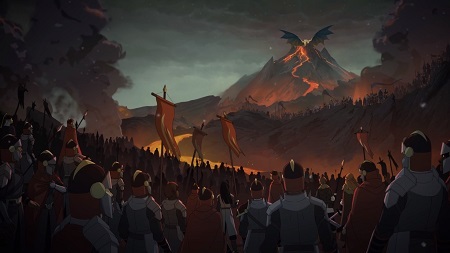 Long in the past, humans discovered dark magic and were driven to the edge of the continent by elves and dragons. The story begins a few years after King Harrow murders the ancient dragon king and destroys his egg, bringing the humans and the elves to the brink of war. Elvish assassins infiltrate the kingdom to kill Harrow and his heir, Prince Ezran. Rayla, a young elvish assassin, finds she cannot take an innocent life. Instead, she helps Ezran and his half-brother Callum escape the assassination attempt after Ezran discovers the dragon’s egg hidden in the castle dungeons. The three then embark on a dangerous, epic quest to return the dragon’s egg to its mother.

Like many fantasy sagas, The Dragon Prince is stuffed with creatures borrowed from the classic, but they have been tweaked to fit their new world. The huge worm is a mountain dweller. The giant spider is an illusion. The dragon-slayers are not the good guys.

The characters are fully developed, diverse and inclusive, with their own complicated relationships and internal lives. The emotions behind their actions feel honest. The moral lessons are clear but the story refrains from hitting viewers over the head with them. The characters are almost entirely normal people–or as normal as elves, mages, and royalty can be. Some are clearly the bad guys, but they have recognizable reasons for what they do. There are, so far, no real caricatures among them.

The three main characters are strongly drawn without falling back on genre stereotypes. Jack De Sena plays Callum, the fourteen year old half-brother to the heir apparent, with an excellent blend of adult responsibility and adolescent insecurity. Paula Burrows portrays the elf-assassin Rayla with terrific conviction and a charming, thick Scottish accent. Sasha Rojen plays the child-prince Ezran as a thinking, feeling, learning person with convincing agency and autonomy.
The secondary characters are also well done. Luc Roderique is King Harrow of Katolis, stubborn, proud, and trying his best to protect his people. Jason Simpson plays Viren, the King’s treacherous advisor, who may or may not be a good man underneath it all. Viren’s children Claudia and Soren are portrayed convincingly as close siblings by Racquel Belmonte and Jesse Inocalla. And Jonathan Holmes gives the elvish assassin leader Runaan a fierce and enduring code of honor.

It’s rare to find something so well-done, so dedicated to its vision, so vibrant and enjoyable.

The Dragon Prince is that something. I recommend it without reservation.